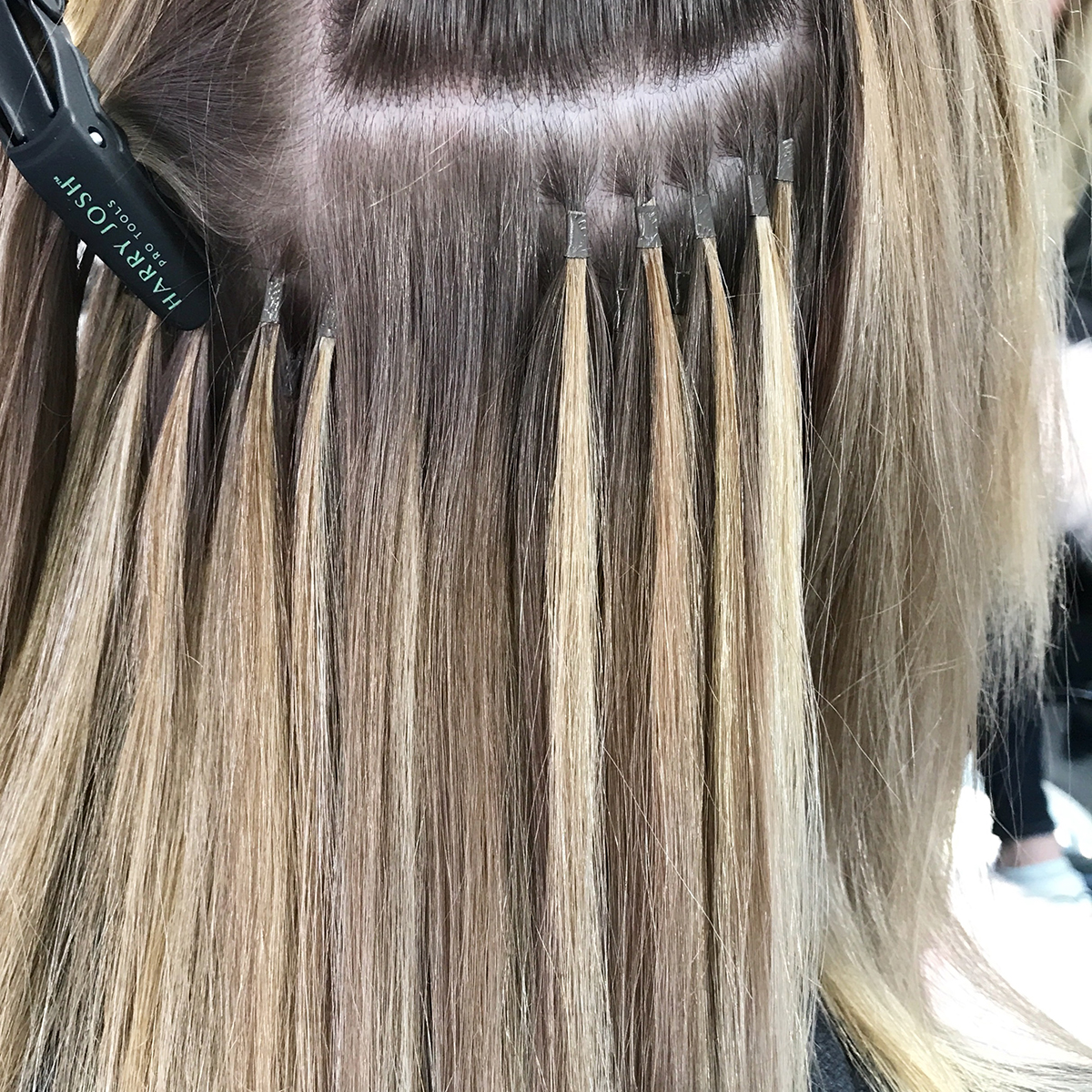 WILL HAIR EXTENSIONS DAMAGE MY HAIR? GLUE VS MICRO RINGS?

As demand for hair extensions increase so to do the number of different attachment techniques each with their own different names. But when you get to the bottom of it your decision on how to attach the extension hair generally comes down to some type of glue, adhesive, clips, sewing or micro rings.  Our decision on which technique to adopt may depend on personal several factors of which one of the most important should be the potential to cause damage to the scalp or natural hair.

The micro ring technique is generally considered to be the safest way of attaching the extension hair because there is no glue and no harsh chemical needed to remove the attachments. To us, this seems logical yet if you scour the Internet you will come across countless of articles (normally by extensionists that use glue) making claims that using glue does not damage the hair.  Of course, immediately after that statement there is a caveat “if the person knows what they are doing”.  And if they don’t by then it is too late.

With micro rings you will not see much, if anything, published making claims that micro rings are unsafe.  Or so I thought until I came across a website of a woman that rents a chair in a Mayfair salon.  The woman, who obviously favours glued extensions, wrote an article titled “Truth About Micro Ring Hair Extensions”.   The article, published on the front page of her website, was so over-the-top and had obviously written to scare, influence and mislead the public into believing that micro rings damaged the hair and that her glued extensions did not. The fact that someone would write such a commercial article and pass it off, as “advice” was rather surprising. What was even more surprising was that this article contained so many mistruths and inconsistencies about micro rings with the crux of her argument being that micro rings caused damaged because the weight of the rings was too heavy for the hair to hold.

As the owner of chain of hair extensions salons that specialises in micro rings and after doing tens of thousands of heads of hair using micro rings, I know this not to be the case.  But it got me thinking.  How strong is our hair?  So, I did some research, and this is what I found.

For a healthy individual with no hair disease, hair fibre is very incredibly strong, about as strong as a piece of copper wire with the same diameter as the hair.  Hair also has elastic properties. It can stretch up to 20% of its original length before breaking when it is dry and when it is wet it may stretch up to 50% before breaking.

So how does hair break if it is so strong? Well it depends on the speed at which the pulling force is applied to the hair. If you pull on hair slowly and steadily with gradual increasing force the hair will resist for quite some time before breaking. But if you apply sudden force and yank on the hair it will break. The tensile strength of the hair is reduced, the hair has no time to respond and stretch, which distributes the force over the length of the hair fibre, and the hair just snaps. Yet despite the apparent strength of hair, it will break if you pull on it too vigorously because this applies a sudden force to the hair.  Putting this in the context of Micro rings, where a clamp is open to remove the extension hair or glued extensions where you have to break and then separate the bond to free the hair, which is likely to cause damage?

However, we are looking for an answer to the question of much weight has to be applied before the hair will break.  We know that hair will break rather easily if a sudden force is applied but it seems reasonable to assume that hair can also break if weight is applied gradually.  This was, in essence, the author’s main argument.  She argued that since the weight of each pre-bond (extension hair) and Micro Ring are pre-determined (i.e. always have the same weight) and not everyone has the same hair texture so Micro rings would be completely unsuitable for medium, fine and very fine hair.

As before, for a healthy individual with no hair diseases, we have determined that hair fibre is very strong so for hair to break without a sudden application of force it will have to break at its weakest point.  The weakest point is the point by which the hair fibre is anchored in the hair follicle in the skin.  I found that not so much research has been done on this, but I did manage to find there one research article that examined the force required to pluck hair.

Another example of just how strong clumps of hair can be is from "scalping" accidents. Sometimes people get their hair caught in machinery. The sudden yanking motion from the caught hair doesn't always pull the hair fibre out - rather the entire skin can get pulled off!

So, there you have it.  Hair is strong but it can be broken so when deciding to go for your next set of extension you will be armed with some information which even the extension technician is unlikely to know.